2 Community, Rider Friendly Business Association 8:40 AM
A+ A-
Print Email
An article in the Star today brings word that the Hells Angels of Toronto will be getting their jewellery, vests and all of their paraphernalia back from the raid that took place n 2007.

Begin Quote: The Crown had argued that all items with the distinctive winged skull emblem were “offence-related property” with the power to intimidate.

In her ruling, Judge Maureen Forestell noted that the bikers don’t need special jewelry or clothing in order to commit crimes.

To the contrary, there’s a club rule that calls upon members to doff club emblems when breaking the law, the judge wrote. End Quote

The Toronto Hells Angels were found not guilty of being involved in a criminal organization and this judge seems to be of the frame of mind that clothing does not make you commit a crime - Huh - I have been saying that for years. It is your conduct as an individual that determine if your actions are criminal or not.

The decision is being hailed as an important one.

Begin Quote: Craig Bottomley, who represented the bikers, hailed the decision as an important one for the bikers and anyone else interested in property rights.

“This was an important win for the club and it serves to reinforce the verdict delivered by the jury, that the Hells Angels are not a criminal organization,” Bottomley said. “The court delivered a message in this case: emblems and symbols cannot be inherently criminal and the government must tie property directly to specific offences before it can take that property from citizens. End Quote

It is interesting to note that this same judge ordered that the clubhouse must be forfeited to the crown.

Begin Quote: While the bikers get back their vests and jewelry, the clubhouse itself was found to be offence-related property, providing a safe haven for illegal activity. End Quote

What are your thoughts on this subject?

Does what you wear and any intimidation factor your garb may cause, make you a criminal or is it the way YOU behave - your actions?

I am being facetious here, but seriously, when is the last time a balaclava stole money from a bank without something being inside the balaclava - AKA a human being.

That brings me to my next train of thought form this article.

Perhaps now we will see a change in the "No Illegal Outlaw Motorcycle Club Colours" rule the RCMP and other police forces along with the liquor boards push for.

And again - this is something I want your feedback on.

My personal feelings are that the ban on colours at public events hurts the greater community.

To my way of thinking, by the very fact that you see people's colours when you are at an event gives you the individual a certain safety and freedom.  If 3-4 guys are wearing the colours of a group that you'd rather not associate with - well guess what - you have the freedom and the knowledge to make the choice that is right for you because you can clearly see the affiliation.

That can be said of any group wearing a patch - not just the Three Piece with a Diamond!

The police will repeatedly tell event coordinators that they will not support an event that allows the wearing of "Illegal Outlaw Motorcycle Gang Colours" because they will not be seen to be supporting "those people".

The liquor boards will tell you that the wearing of any garb touting"gang" affiliation can cause fights and violent altercations, in licensed establishments like bars and beer gardens, when rivals know their "enemy" is present.

So my question on this aspect of today's topic is this:
Do you support  the ban on wearing colours at public events or in bars?
If so, why.
If not - why...
I am curious about the sentiments of every faction of our community, so talk to me....

The feeds are relatively quiet so far today, but there was a lot of news that came in over the weekend.
Check it all out at www.beltdrivebetty.com where our work is keeping You informed!

We have a few very special announcements to make: 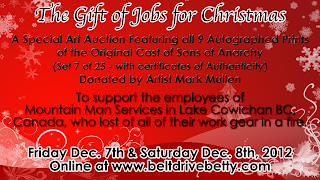 You can see the prints for the auction by visiting www.markmullenart.com 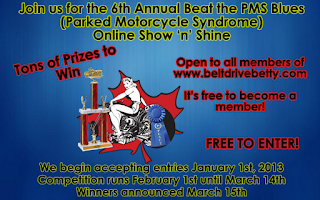 If you are interested in becoming a sponsor of our show 'n' shine, drop me a line:
bdbetty @ gmail.com (fix the spaces)

We are also working on the 2013 Black Book and want to expand the Canadian Riders Support Network. To that end we are offering anyone who signs up as a Canadian Rider Support Team Member a Free subscription to the Busted Knuckle Chronicles - Canada's ONLY weekly newspaper for riders!


We bring you the BEST in rider support tools!

Our sponsor Intercon Messaging provides our members with the BDB Club Rider Support Hotline and the Never Ride Alone Program. The BDB Club Rider Support Hotline is accessible from Canada and the Continental US and will help you access the members of the Canadian Riders Support Program, Rider Friendly Business Association Members (by putting you in touch with either Ali or myself) and Intercon Messaging is a certified 911 Dispatch Centre that administers the Never Ride Alone Program.

Membership on our web site is free as are these resources!

I leave you with a few funnies shared with me by friends from Face Book and by Email: 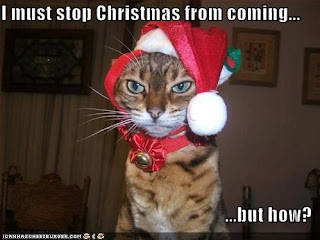 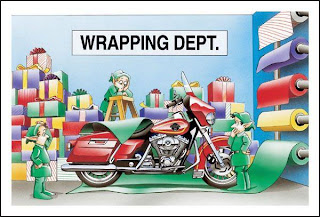